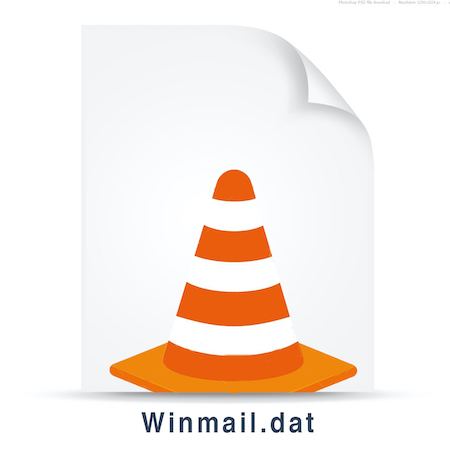 As a Mac user living in a world with filled with PC users, at some point you must have come across an email with a mysterious file attached called winmail.dat. You are not able to open it and that both scares you and makes you curious. First off, you can relax. Most likely it is nothing more than a formatting file for the email that comes from Outlook or Exchange on a Windows PC and you can ignore it. However, on some occasions it is an actual attachment that your PC friend is trying to send to you. Here is what you do.

The following instructions are directly from the website osxdaily.com. All photos and content below are credited to OSXDaily. For the full article you can see it here.

Many Mac Mail users who send and receive emails with their Windows counterparts using a mail client like Outlook or Microsoft Exchange will discover a “winmail.dat” file attached to those emails. If you try to open a winmail.dat file on Mac OS X, you’ll usually find there is nothing available to open the attachment, or it often contains gibberish and is illegible.

What is a Winmail.dat File?

Winmail.dat files are generated by Microsoft Exchange and Microsoft Outlook, Mac users typically find them arriving in emails sent from the Windows world and opened in Mail app, and the winmail.dat files can be one of two things; rich text formatting for an email (for example, bolded text, or a stylized HTML email signature, a vcard), and less often, they can be an actual email attachment file which has been wrongly identified as winmail.dat, but is actually a Word document, calendar invite, Excel spreadsheet, RTF file, or some other legitimate file type that has been attached to the message.

3 Ways to Open Winmail.dat Files on a Mac

Do keep in mind if the winmail.dat file is simply a rich text version (TNEF) of the email that has been received, there is little reason to open it, as it would simply be a stylized version of the email you already received (much like the difference between TXT vs RTF files). In fact, Apple actually tells you to ignore winmail.dat files completely if they arrive in Mail app, which is often fair advice, but in some situations the winmail.dat file is an actual email attachment that has been misidentified, and thus need to be opened. Because it can be difficult to know the difference between the two ahead of time, it’s important to know the intention of the email sender, if it’s just a casual message with a small winmail.dat file attached, it can usually be ignored, whereas if the sender is referring to an attached document which has shown up as a winmail.dat file instead of whatever they reference, you’d likely want to try and open it.

There are several ways to open and access winmail.dat files in Mac OS X, we’ll cover three of them; one involving a relabeling trick, another using an application, and another using a webmail client

Method 1: Saving the Winmail.dat File as the Intended File Type

Often the easiest way to open a winmail.dat file in Mac OS X is to save it and relabel the file as the intended file type. For example, if you get an email from an Outlook user in Windows saying “attached is the import Microsoft Word document” then you’d know it is supposed to be a .doc or .docx and can be treated accordingly. Be sure you have the show file extensions feature of Mac OS X enabled for best results.

This is admittedly a little silly, but file extensions identify what a file is and how it opens in all operating systems, so even if a file is one type it can be misconstrued as being another if the extension is wrong – whether Mac OS X or Windows. The good news is despite being a bit of a workaround, this works to open winmail.dat files almost always on the Mac, assuming it’s a file that has been misidentified.

In this example, a winmail.dat file has been wrongly identified as belonging to VLC, but it’s actually just a docx file, thus renaming the extension and opening the docx in Mac OS Xas usual allows the once erroneously named ‘winmail.dat’ file to be seen as intended. In this case it was a docx file that was quite simple so it opened fine in TextEdit with the new file extension:

You can also save the winmail.dat attachment to the Finder and relabel the extension there, which can then be opened as usual.

If you’re a Mac user who frequently encounters many emails sent from Windows users with ‘winmail.dat’ attachment files, another approach is to use a free tool called “TNEF’s Enough” (Sound it out, teneffs enuff – creative!). This is probably the best approach if you see and encounter many winmail.dat files on the Mac (whether in Mail or otherwise) and want to always get to the bottom of them quickly.

Get TNEF’s Enough from the Mac App Store (free)

Once installed, you can use TNEF’s Enough with the “open with” menu, or by dragging and dropping the winmail.dat files into the application itself. The app will then sort out what the winmail.dat file is supposed to be for you, which you can then save or export yourself directly from the app. Often you’ll find the winmail.dat file is just a boring rich text formatted email sent from Microsoft Outlook or Microsoft Exchange, but as we’ve mentioned, they can also be misidentified attachments too.

The creator of TNEF’s Enough describes the utility as follows:

TNEF’s Enough allows Macs to read and extract files from Microsoft TNEF files. The files are usually received via email from Microsoft Exchange and Microsoft Outlook users. Standard e-mail programs will receive the TNEF file as an attachment named “winmail.dat.”

This app works really well, so if you find yourself with a regular dose of winmail.dat mysteries to deal with, it’s a worthwhile install. It’s free, and there’s even an iOS version available too for those who encounter the same attachments on the mobile side of things.

Method 3: Forward the Email with Winmail.dat to Gmail

The Gmail web based email client has no problem handing winmail.dat files, and will almost always accurately interpret the winmail.dat as either a rich text formatted email, or as an accurate file attachment.

This is literally just a matter of forwarding the email in question to your own gmail account, then opening GMail.com in a web browser to view and open the file. The winmail.dat file will either be rendered as a formatted email as intended from the Microsoft Outlook / Exchange side of things, or you can open it within Google Docs on the web. This forward approach is not a fancy solution, but it works great.

Finally, you can also just request the sender in the Windows world stop sending their emails in rich text format and instead send them as plain text, but that’s not always possible, and not every sender is compliant. Plus, with how popular HTML signatures are, it may not be a reasonable solution anyway.